Ignition timing and the supercharged engine. 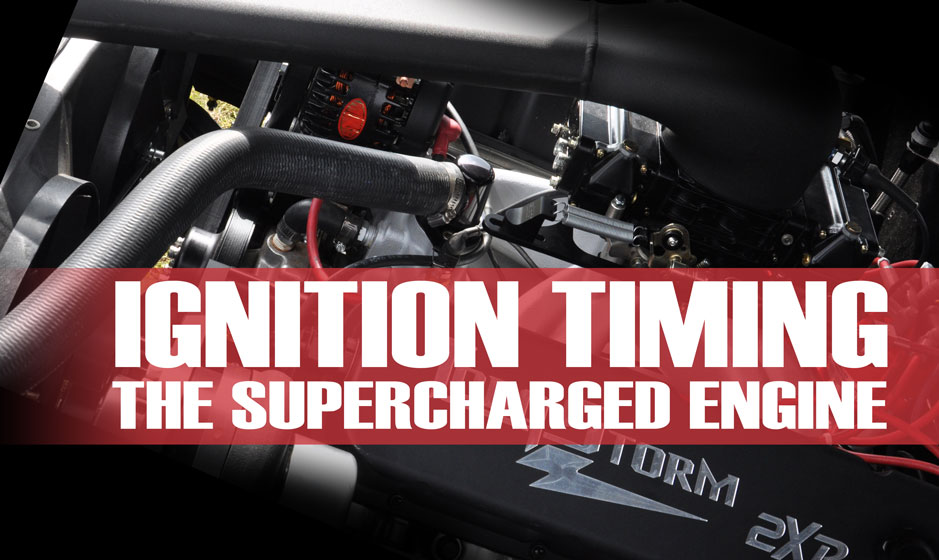 There is no easier way to increase an engine’s power, especially one with a carburetor, than bolting on an efficient TorqStorm supercharger.

The dynamics are quite rudimentary. The TorqStorm supercharger fills the cylinders with additional air, tricking the engine into believing it has more displacement than it actually does. Mix in the right amount of fuel so that all of the newfound air can be utilized during combustion, and a nice engine turns into a tire-shredding monster.

But that gets you about 90% there. After that, you will need to tune the ignition advance curve to give your engine all the power a TorqStorm supercharger is anxious to provide.

The need to initiate the chemical-to-mechanical energy exchange is the task of the ignition system.

At what time the spark plug arcs is controlled by the clock position of the distributor and the centrifugal weight mechanism.

The piston is attached to the crankshaft via the connecting rod, so its location in the bore is identified in crankshaft rotational degrees, either before the piston reaches top dead center (BTDC) or after (ATDC).

A timing specification of 10 degrees BTDC simply means that the spark plug will arc when the crankshaft is 10 rotational degrees before the piston arrives at TDC.

There are four ignition timing areas.

Base timing is the position of the distributor in the engine block.

Vacuum advance is the amount of advance (BTDC) that alters the timing above the base setting.

The mechanical or often identified as centrifugal advance, is the additional lead (BTDC) that is added by the movement of the distributor cam and rotor at higher engine speeds.

As its name implies, the total timing is the sum of the three areas.

At full throttle, there is a minimal signal available to the vacuum advance canister. Thus, any advance introduced at part throttle is eliminated. At this time, the total timing is the base setting along with the mechanical advance.

The vacuum advance aims to improve fuel economy and throttle response at light load and part throttle when manifold vacuum is high. Once a supercharger is added to the engine, other than at idle, the amount of vacuum in the induction system is minimal. It is replaced by manifold boost pressure.

For this reason, the tuning of the ignition advance when a TorqStorm supercharger is fitted to an engine with a carburetor and distributor is left to the base setting and the mechanical advance system.

Why is timing advance required?

Regardless of the method used to advance the timing, it is required due to one simple fact; the piston travels in the bore faster than the flame from combustion does. Thus, the flame needs a head start (advance) to keep up with the piston.

Now our discussion needs to get more technical.

The flame speed in an engine is unique to that design. It is further influenced by the amount of air filling the cylinder bore and engine speed and load.

The expansion of the flame causes cylinder pressure to work against the piston. When in the crankshaft’s rotation past TDC (ATDC) this is, becomes critical for the engine to produce the most power.

The consensus of the industry is for the best performance, peak cylinder pressure from combustion should occur at approximately 14 degrees ATDC. Therefore, this is identified as LPP for the location of peak pressure.

If the LPP happens before or after that crankshaft position, full potential power is not achieved.

The base and total ignition timing goal are to create the most efficient LPP under every engine operating state. In essence, you are defining when peak cylinder pressure occurs.

With this established, the tuning of the base and total timing on a TorqStorm supercharger-equipped engine will not only provide the best throttle response but the most horsepower and torque.

The supercharger is doing its job. Your responsibility is to tune the ignition timing to glean all of the power the TorqStorm can deliver.

The engine will tell you.

When developing an engine, the car companies use in-cylinder pressure probes and sensors to identify the crankshaft’s rotational position. This is not possible for the enthusiast. But all is not lost.

Just as a cat purrs or a dog wags its tail when happy, an engine will reveal to you when the ignition curve is producing the correct LPP. As a result, it will run the best and make the most horsepower and torque.

To truly unleash all of the additional power a TorqStorm supercharger is anxious to provide, a complete timing curve must be created. To accomplish this, you will need an advance timing light and an applicable mechanical advance tuning kit.

The most effective means to accomplish this is on a chassis dyno. However, it can be done on the street or drag strip, but that data is often skewed or inconclusive.

The base setting does not require a dyno. It is employed to achieve the rate of timing advance and total timing. Each engine will want its own unique base and total timing settings. The following guidelines will help.

1: Tune the engine with the gasoline brand and octane that you will predominately use. This does not mean you cannot use a different brand, but the fuel’s characteristics will potentially alter the tune.

It must be noted that when a TorqStorm supercharger is installed that there are a few dynamics that will impact the amount of spark advance.

The higher level of volumetric efficiency (cylinder fill) will inherently increase the flame speed and thus, less of a head start is needed to keep up with the piston.

The other factor being the fuel’s propensity to auto-combust (ping or knock) due to the higher cylinder pressure and air temperature.

For these reasons as engine rpm increases, so does the output of the TorqStorm supercharger, and the ignition timing will need to be pulled back (less advance).

If you were to graph the boost/timing curve, as boost increases spark lead goes down.

You may choose to integrate an ignition box such as the MSD Boost Timing Master along with your TorqStorm supercharger. This system will automatically pull out (retard) spark advance as boost climbs and is easily tuneable.

4: When working on the chassis dyno, first optimize the base timing and then make full-throttle pulls from idle in a stepped rpm format. The first pull should be idle speed to 3,000 rpm. Next, tune the rate of advance to glean the most horsepower and torque. When achieved, the subsequent dyno pulls will be in 1,000 rpm increments up to the maximum engine speed.

5: Once all of the tuning is done, drive the car on the dyno to see how it feels.

6: Make a few full-throttle pulls up to the maximum engine speed so that you can graph the entire power curve. You will find that a TorqStorm supercharger, due to its efficiency, will produce a very desirable and flat power curve when the ignition advance is tuned correctly.

These steps may sound more complicated than they actually are. Locate a chassis dyno shop that knows how to tune a distributor. Within a few hours, you will have a great running engine.

All that is left then is for you to enjoy 100% of your TorqStorm supercharger’s potential for years to come.

Oh… there is one caveat… you WILL get less life from the rear tires!