Can cylinder head flow testing be an indicator of potential horsepower? 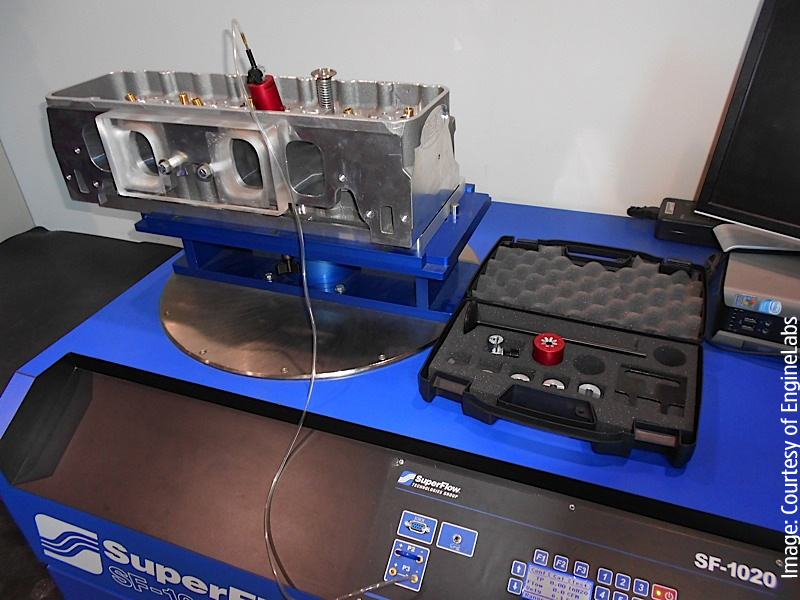 If you are reading this, it means you have progressed from being a person that no longer wants to guess but instead wants to know how to make horsepower in an engine.

The title of this primer is the question I asked myself when I had my engine shop. I then signed on the line at the Performance Racing Industries (PRI) trade show to buy a brand new SuperFlow SF-600 flow bench. It was 1993, and nothing was written or published about using intake port flow values as a predictor of horsepower.

Before I provide the answer to the question, a few points need to be established.

Every engine suffers from three areas of loss in the conversion of chemical to mechanical energy, from the potential in Btu (British thermal units) the fuel has. There are pumping, frictional, and thermal losses.

The design of the intake port of the cylinder head along with the valve size and placement, will influence the potential air flow.

Pumping is the work the engine does to fill and empty the cylinders, first with charge and then to purge the spent gasses. Frictional losses account for the energy consumed by the rotating and reciprocating parts of the engine. The heat energy that is absorbed by the coolant and goes out the tailpipe are the thermal losses.

A good rule is that about 25% of the potential energy in the fuel results in power delivered to the flywheel of an engine.

Another consideration is that the dynamics of how a running engine fills its cylinders with charge (air and fuel mixed together) is different than how a flow bench works.

A flow bench is static, and it uses an electric motor to create constant air movement. At the same time, the cylinder fill in an engine is dynamic and to a certain extent, unpredictable and non-linear.

In addition, airflow into an engine falls under the study of fluid dynamics, with the basic premise being that high-pressure travels to a lower pressure region.

Even with the differences between a flow bench and a running engine, the test data can be an excellent and highly accurate predictor of the horsepower potential of a cylinder head with a simple equation.

Here is an example.

Let’s say you have a cylinder head that flows 250 cfm (cubic feet of air/minute), and it is an eight-cylinder engine. Then, plugging in the numbers, the following is revealed.

The equation can also be worked backward.

I used to build what I called “a slide rule engine.” First, I would ask the customer the desired drag strip ET and the car’s weight. Then, using the Moroso Power-Speed Calculator, I would derive the horsepower required.

Whenever modifying an engine, especially for drag racing, define your goals first. Then you can apply the mathematics.

I would then modify the equation to determine the airflow that is needed to produce that horsepower.

The cylinder head would need to flow 250 cfm.

For example, if the client’s current cylinder head intake port flowed 190 cfm, the most power it would support without supercharging, or nitrous oxide would be approximately 390.64 horsepower.

Over the years, I have found this simple equation extremely accurate if precise airflow data is provided. Also, it can be employed to counter the claims of others about the horsepower their engine makes or what they are trying to sell you.

For example, you are in the market for an engine, and Company A uses the brand XYZ cylinder head. The literature for the engine states 600 horsepower. It sounds great for the price.

So now that you are armed with the math, you contact the cylinder head manufacturer and ask them the intake port flow of their casting. But you already know what the answer should be, 600/8/0.257 = 292 cfm.

Suppose they tell you that in the as-sold form, it flows 200 cfm and, when fully ported, will move 245 cfm. In that case, there is an excellent possibility that the company or individual selling the engine is exaggerating its potential horsepower.

The provided equation is exceptionally accurate on naturally aspirated engines to around 700 horsepower and 7,000 rpm. Once above those values, the rate it skews increases.

The airflow value used must be achieved at 28 inches of H2O test pressure (depression). If the port is tested at 30 inches of H2O, it will show higher flow in cfm and corrupt the equation.

The valves in the cylinder travel from fully closed to the maximum lift of the camshaft along with the multiplicative effect of the rocker arm.

As the valve just begins to lift from the seat, the airflow is only a fraction of what would be achieved at full lift.

Keep in mind that the equation is only considering maximum valve lift airflow.

Suppose a cylinder head is advertised to flow 250 cfm. In that case, you need to confirm the test pressure (depression), the valve lift the advertised flow occurs, and the bore diameter on the flow bench used.

If your engine has a 4.00-inch bore with a cam that lifts the intake valve to 0.525 inch, and the cylinder head was flow tested on a 4.125-inch bore and the published flow in cfm is at 0.600 inch, that casting will flow less air and produce lower power in your application.

This is due to the smaller 4.00-inch bore. It will increase valve shrouding, and the lower lift will most likely result in less airflow. You can then ask the cylinder head company for flow data closer to your engine’s bore and valve lift.

This is an example of flow test data. Note how the bore size and test depression are provided.

It also must be remembered that this is an open-intake port flow value. Therefore, once the induction system is attached to the cylinder head (either carburetor or EFI), it will drop the airflow through the cylinder head in almost all instances.

Every intake port has a point in the valve lift where no more air can pass. For example, a cylinder head may increase flow at every higher lift point until it reaches 0.600 inch. Once that lift is achieved, either the flow does not increase or may actually decrease. When this occurs, the port is considered to have stalled.

The airflow potential of the intake port of the cylinder head is foundational in the engine’s ability to make horsepower.

All of the hotrod tricks, such as headers, higher compression ratio, camshaft design, etc., are employed to minimize the three areas of loss from the energy content of the fuel.

The sum cannot be greater than the airflow entering the engine… but a great gamechanger is always a TorqStorm supercharger!